The question has come up, “How do I best use Artist Keywords?” Today we answer that question.

In most databases there are two artist fields: one is for the artist’s name as you’d like it to appear in your logs and reports (Artist), the other is used to test for artist separation (Artist Keywords). In many cases the Artist and the Artist Keyword fields will contain the same information: Aerosmith, Brooks and Dunn, Pink, etc. But in other situations the data in each will vary.

Many artists feature other “guest stars” on their songs. Let’s look at “Telephone” by Lady Gaga f/Beyonce. Your Artist Keywords on that song would be:

To enter multiple keywords on a song, double-click in the Artist Keywords field in Library Maintenance (song card or grid view) to access the Keyword Entry box and enter the primary keyword in the first field, followed by the others and click Apply/OK. Your entry box will look like this: 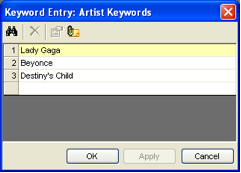 Now any time “Telephone” is scheduled, it will follow the Artist Keyword rules for each keyword assigned to that song.

Let’s use another example of “We Are the World” which featured more than 20 soloists. If we wanted to, we could list each one as a unique Artist Keyword on that song, and MusicMaster would test the rules for every keyword assigned. In the picture below you’ll notice that only the first (primary) keyword displays in the Artist Keywords field, but that when we hover on that field with “Show Balloon Tips” enabled, we see all the keywords assigned… 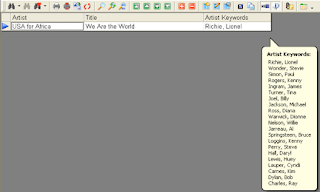 You’ll also notice that we listed them all with their last names first. This is done for consistency and for sorting purposes. Ultimately it doesn’t matter how you enter the keywords so long as it is consistent. In other words…RICHIE, LIONEL and LIONEL RICHIE are two different keywords as far as MusicMaster is concerned.

Now let’s take this one step further. Let’s assume we are programming an oldies station that plays 60s and 70s music, so we’re going to play songs by the Beatles and by each of the members of the band. So how do we set up Artist Keywords in this situation? This depends on your programming philosophy. If you want to make sure that songs by the group are separated from songs by the soloists, but the soloists needn’t be separated from one another, you would use the Artist Keywords like this…

“Hey Jude” by The Beatles 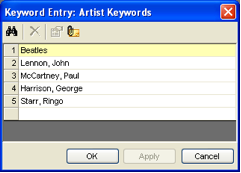 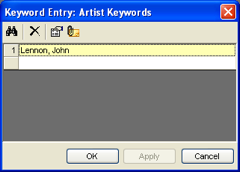 Because Lennon’s keyword is listed on the group song as well as the solo song, it will prevent them from playing too close to one another, based on your time separation rules for these keywords. And since the other keywords for McCartney, Harrison, and Starr are absent from “Imagine”, songs by those individuals will not be in violation of any artist keyword separation rules.

If you want to keep the soloists’ songs separated from one another and from songs by the group, your Artist Keyword entry would be the same for “Hey Jude”, but you would add Beatles as a second keyword on “Imagine”… 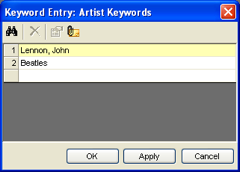 You would also list Beatles as a second keyword on any solo songs by Paul, George, and Ringo. As a result, all the songs by the Beatles or by any of its members will be separated from one another based on the rules for those keywords. You can apply this same methodology to any group/soloist scenario: The Eagles, Van Halen, The Jackson Five, and so on.

In some formats where artists frequently make guest appearances on songs by others, it is sometimes beneficial to have two Artist Keyword fields. The first one would be for your primary artist keyword and the second for any guest performers. Take for example a song by Eminem that features Dr. Dre. Let’s assume Dr. Dre’s part on this song is pretty minimal, and he is making similar appearances on songs by Akon and by Lil Kim and let’s assume all three of these songs are in Heavy Currents…none of them will ever get aired because of Dr. Dre’s artist separation time. If we had a “Guest Keywords” field, Dr. Dre could be listed there instead of as a second Artist Keyword in that field. Your rules could be set that an Artist Keyword has to be separated from itself by 50 minutes, but a Guest Keyword only needs 10 minutes of separation. Now those three songs would be able to play because Dr. Dre’s keyword wouldn’t be holding them back.

Want to clean up your Keywords? Go to Dataset/Library/Keywords and use the drop-down to select Artist Keywords to see a list of all the artist keywords in the entire database. Here you can edit the keywords and it will have a mass change effect on your data. Let’s use Beatles as an example. BEATLES is different from THE BEATLES which is different from BEATLES, THE. Make them all consistent to maximize effect of the artist keyword rules. We’ll discuss this in more detail in a future article, as well as dive into the Keyword Separation Wizard.

In conclusion, Artist Keywords are essential to accurate scheduling in MusicMaster. Taking the time to set them up properly and consistently will enable artist separation to be much more effective and will make log editing more efficient.