The Day the Music Hides posted on February 7th, 2009
Tweet

On January 18, 2008, Pete Seeger joined Bruce Springsteen and grandson Tao Rodriguez Seeger to honor President Barack Obama in the finale of his Inaugural concert. With this patriotic gesture, Seeger celebrated a new chapter in American history and closed a chapter in his own. Out of the millions that watched his performance, few might have recalled that fifty years back, Seeger had been labeled anti-American and banned from public performances and radio airplay. 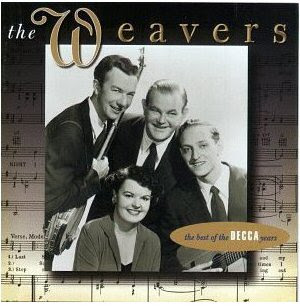 Sixty years before Seeger took the stage in Washington DC, he and three other musicians calling themselves The Weavers landed their first gig in the Village Vanguard jazz club in New York City. Shortly after, the group had landed a contract with Decca Records and by 1949 had a hit song with Lead Belly’s “Goodnight Irene”. Over the next decade, Seeger, Ronnie Gilbert, Lee Hays, Fred Hellerman popularized traditional folk songs, inspiring the “folk boom” that followed in the 50’s and 60’s which included The Kingston Trio and Peter, Paul and Mary. Hit songs included labor songs and folk classics like “On Top of Old Smoky” “The Wreck of the John B” “Follow the Drinking Gourd” and “Pay Me My Money Down.” Their inspirational performances were typically sing-alongs, with Seeger shouting out the lyrics before each line.

Led by the witch hunts of Senator Joe McCarthy, the Red Scare of the 1950’s included the investigation and blacklisting of many performing artists suspected of touting anti-American believes. As the Weavers had a history of singing protest songs and folk songs with a leftist and pro-Union slant, they soon came under scrutiny. When the group shied away from their more controversial material, they were criticized by the left-wing press for selling out. Meanwhile, right-wing and anti-Communist groups protested at their performances. Soon, the Weavers had found themselves under FBI surveillance and were blacklisted by the entertainment industry. No longer able to play large venues or get radio airplay, the Weavers lost fans. In 1953, Decca terminated their recording contract and deleted their songs from its catalog.

In 1955, the group reunited to perform a sold-out concert at Carnegie Hall. As a result, the Weavers were signed by the independent Vanguard Records and a recording of the concert was released. By this point in time, folk music was gaining popularity and the effect of McCarthy’s extremism was fading. While the Weavers found renewed success, however, Seeger left in bad terms. After the group was hired to provide the vocals for a cigarette commercial, Seeger – who was opposed to tobacco – left the group after fulfilling his commitments in 1958. Seeger went on to have a fulfilling solo career.

Given McCarthy’s history of exaggerating his accusations, it’s difficult to condemn Seeger and The Weavers. Though Seeger had become a member of the Young Communist League at the age of 17, he had drifted away from the Party after the war. While with The Almanac Singers, Seeger sang: “Now, Mr. President (Roosevelt)/We haven’t always agreed in the past, I know/But that ain’t at all important now/What is important is what we go to do/We got to lick Mr. Hitler and until we do/Other things can wait.”

Seeger spent a lifetime merging music and political activism and despite differences in opinion, he honored the American system by exercising the right to free speech. Whether or not Americans have become more or less forgiving of the uncommon viewpoint half a century later, today’s controversial artists are undeniably free from political persecution. Artists with agendas (think of recent statements by Eminem and Kayne) will continue to enjoy the freedom to strike a chord with some and discord with others. And a man who was once marked as a political enemy can play the stage at the inauguration of a president.

The Weavers were honored for their struggles during the 2006 Grammys. After receiving the Lifetime Achievement Award, group member Fred Hellerman recounted the persecution for the crowd, declaring: “If you can exist, and stay the course — not a course of blind obstinacy and faulty conception — but one of decency and good sense, you can outlast your enemies with your honor and integrity intact.”