Mix Up Your Sound with Proportional Elements posted on May 5th, 2010
Tweet

In the pull-down menu in the Element field in your clock, select Proportional. Then set the ratio among the categories of your choosing. 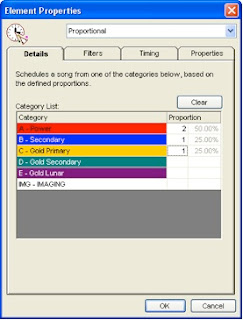 In this example we’re using a 2:1:1 ratio of A:B:C. Now, this doesn’t mean that you’ll always hear two A’s in this position, then a B and then a C. Rather, over the course of time, you’ll have a 2:1:1 ratio of A:B:C in that position. You could get five A’s before a B or C comes into that clock position. But, over time, that requested ratio would be realized.

Here’s another idea: Use a Proportional element to vary your gold library categories. Just as in the example above, you can pick the categories and proportions—you’ll still get a gold, but which category will vary rather than being the same category in the same position every time.

There are lots of ways to add a layer of unpredictability to your clocks, and Proportional elements are just one of those ways.